skip to main | skip to sidebar

Archimedes was a Greek mathematician, philosopher and inventor who wrote important works on geometry, arithmetic and mechanics.
Archimedes was born in Syracuse on the eastern coast of Sicily and educated in Alexandria in Egypt. He then returned to Syracuse, where he spent most of the rest of his life, devoting his time to research and experimentation in many fields.
In mechanics he defined the principle of the lever and is credited with inventing the compound pulley and the hydraulic screw for raising water from a lower to higher level. He is most famous for discovering the law of hydrostatics, sometimes known as 'Archimedes' principle', stating that a body immersed in fluid loses weight equal to the weight of the amount of fluid it displaces. Archimedes is supposed to have made this discovery when stepping into his bath, causing him to exclaim 'Eureka!'
During the Roman conquest of Sicily in 214 BC Archimedes worked for the state, and several of his mechanical devices were employed in the defence of Syracuse. Among the war machines attributed to him are the catapult and - perhaps legendary - a mirror system for focusing the sun's rays on the invaders' boats and igniting them. After Syracuse was captured, Archimedes was killed by a Roman soldier. It is said that he was so absorbed in his calculations he told his killer not to disturb him. 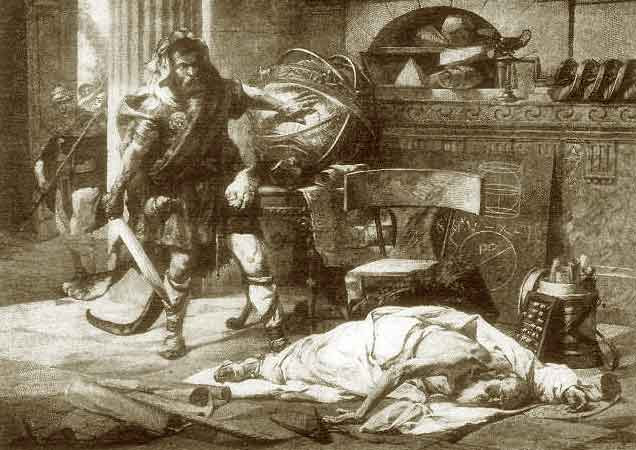 287BC - 212BC
Mathematician, Inventor, Astronomer 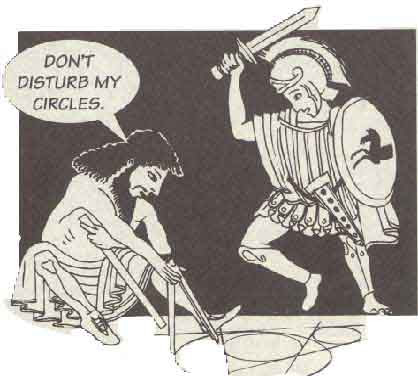 Μη μου τους κύκλους τάραττε!
Archimedes last words,
while he was drawing geometric figures on the sand,
before he was killed by a barbarian roman soldier...
Latin: Noli turbare circulos meos
English: Do not disturb my circles 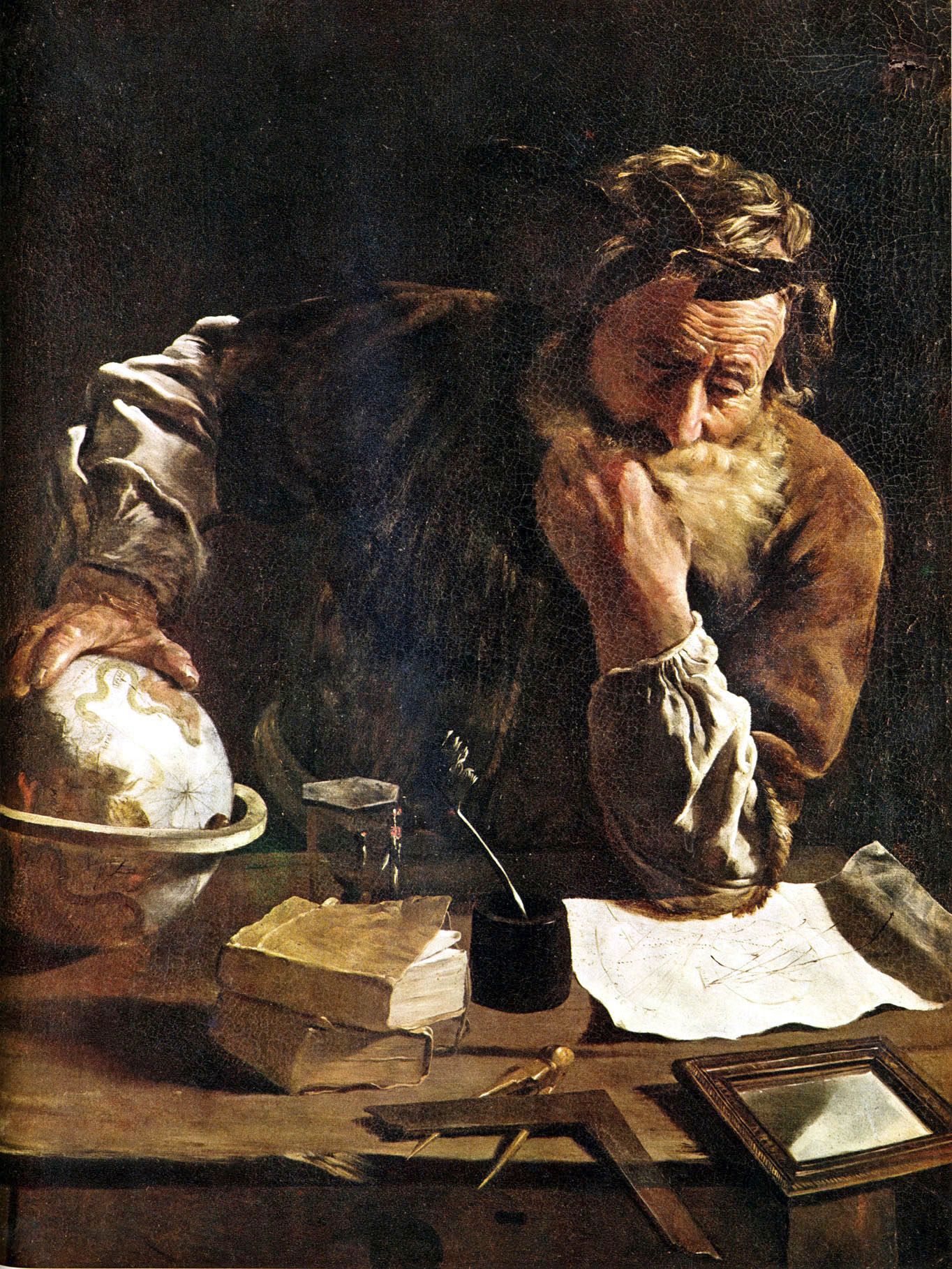 Give me a lever long enough and a place to stand, and I will move the world. - Archimedes 230 BC. These daring words were made by a man whose genius changed the worlds of science and math forever. Many historians consider Archimedes to be one of the greatest scientists in history and the greatest mathematician of all time. Archimedes' contributions to science and math include the discovery and development of the laws and principles of mechanics, buoyancy, hydrostatics, specific gravity, the lever, and the pulley; in addition, he discovered how to find the measurement of a circle and the volume of a solid. These discoveries and other inventions were the life and love of Archimedes.

Archimedes grew up in the Greek city-state of Syracuse on the island of Sicily. His father was an astronomer named Phidias. Archimedes is known to be a relative of Hiero II, who was the king of Syracuse during Archimedes' life. Hiero and Archimedes were very close friends. However, nothing else is known about any other members of Archimedes' family. Archimedes lived in Syracuse for his whole life, except for when he went to school in Alexandria, and at one point it was up to Archimedes' inventions to save Syracuse from being taken by the Romans. 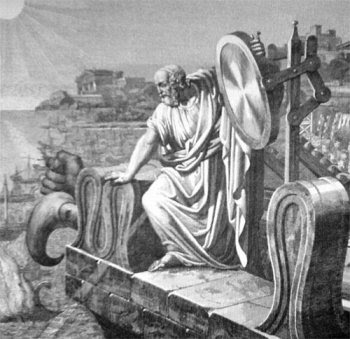 Archimedes had a good education as a boy, for the Greeks loved knowledge and sent their sons to schools to become knowledgeable Greek citizens. Some of the subjects that he studied as a boy were poetry, politics, astronomy, mathematics, music, art, and military tactics. When Archimedes was in his teens he sailed to Egypt to study in Alexandria. There he went to a famous school of mathematics that had been founded by Euclid. Archimedes studied astronomy, physics, and mathematics with many other great minds of the time. His teacher was named Conon of Samos. Conon was one of the greatest influences that Archimedes had in his life. He taught Archimedes many things about life and science. Archimedes' studies in Alexandria became the foundation on which he built his career as a scientist and mathematician.

The first of Archimedes' inventions was called the Archimedean screw. He invented the screw because he saw how hard it was for the Egyptians to carry water buckets around their whole fields. The screw was like a hand pump that was used to spray water directly from the Nile onto the fields. Archimedes spent all of his time pouring over mathematical and scientific problems. He considered his greatest accomplishment to be his discovery of how a sphere was 2/3 the volume of a cylinder that had an equal height and width. He also discovered a way to find the measurement of a circle and the volume of solids. Levers and pulleys are another of Archimedes discoveries. These discoveries are just a part of the many doors that Archimedes opened for new scientific discoveries.

Although his genius in math is well known, Archimedes was also an astronomer and made contributions to this science as well. As a boy his love for astronomy was developed because his father's work in that field, and this allowed Archimedes to learn much about it. Archimedes used geometry and astronomical observation to accurately find the circumference of the earth with in a few hundred miles. Archimedes built a machine that helped him to measure the angles of the rising sun. His machine helped him to correctly calculate the length of a year (the current Greek year of Archimedes' time relied on the phases of the moon to calculate a year, and so were constantly having days added and taken off). Archimedes loved to study astronomy, and although his career in astronomy is not so amazing as his one in mathematics, he still made discoveries that helped to change the science of astronomy for scientists for generations to come. 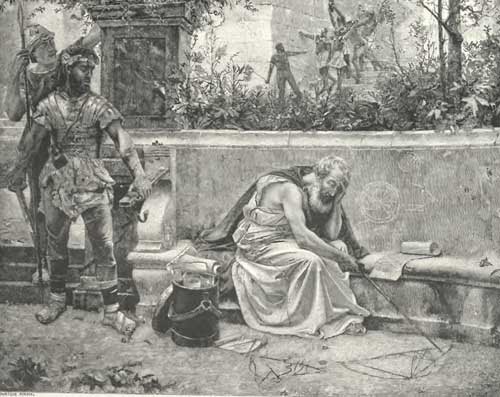 God created few men to have genius, Archimedes was one of those men. He made many discoveries and figured out many of the scientific principles that scientists now consider to be some of the basic principles of math and science. However, even famous men can have insignificant endings. In 212 the Romans had gained control of Syracuse after a long siege. Archimedes was at his home totally absorbed in his work. His last recorded words of are these, "Noli turbane circulos meos!" This means, "Do not disturb my circles!" Archimedes was working on a mathematical problem and was so absorbed in it that he became annoyed with a certain Roman soldier who stepped onto the cicles that he was drawing. This Roman soldier had come to bring Archimedes before his general, who knew of Archimedes' genius and wanted to meet him. When Archimedes said this to the soldier, the soldier became so angry that he drew his sword and killed Archimedes. When the soldier's general heard what he had done, the soldier was executed. This was how the great genius Archimedes met his end. Yet his work lives on today, and we are the benefactors of his labors in the fields of mathematics, science, and astronomy. 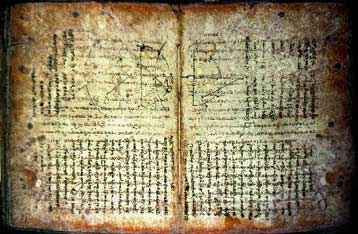 Give me a place to stand, and I will move the earth. — Archimedes

Having been the discoverer of many splendid things, he is said to have asked his friends and relations that, after his death, they should place on his tomb a cylinder enclosing a sphere, writing on it the proportion of the containing solid to that which is contained. — Archimedes
If thou art able, O stranger, to find out all these things and gather them together in your mind, giving all the relations, thou shalt depart crowned with glory and knowing that thou hast been adjudged perfect in this species of wisdom. — Archimedes
Hieron asked Archimedes to discover, without damaging it, whether a certain crown or wreath was made of pure gold, or if the goldsmith had fraudulently alloyed it with some baser metal. While Archimedes was turning the problem over in his mind, he chanced to be in the bath house. There, as he was sitting in the bath, he noticed that the amount of water that was flowing over the top of it was equal in volume to that part of his body that was immersed. He saw at once a way of solving the problem. He did not delay, but in his joy leaped out of the bath. Rushing naked through the streets towards his home, he cried out in a loud voice that he had found what he sought. For, as he ran, he repeatedly shouted in Greek; 'Eureka! Eurekal I've found it! I've found it!' — Marcus Vitrivius Pollio
Archimedes will be remembered when Aeschylus is forgotten, because languages die and mathematical ideas do not. 'Immortality' may be a silly word, but probably a mathematician has the best chance of whatever it may mean. — Godfrey Harold Hardy
Referring to the decimal system of numeration or its equivalent (with some base other than 10): To what heights would science now be raised if Archimedes had made that discovery! Gauss regarded this oversight as the greatest calamity in the history of science. — Carl Friedrich Gauss
There have been only three epoch-making mathematicians, Archimedes, Newton, and Eisenstein. — Carl Friedrich Gauss
It is India that gave us the ingenious method of expressing all numbers by means of ten symbols, each symbol receiving a value of position as well as an absolute value; a profound and important idea which appears so simple to us now that we ignore its true merit. But its very simplicity and the great ease which it has lent to computations put our arithmetic in the first rank of useful inventions; and we shall appreciate the grandeur of the achievement the more when we remember that it escaped the genius of Archimedes and Apollonius, two of the greatest men produced by antiquity. — Pierre-Simon Laplace

ARCHIMEDES. On hearing his name, shout 'Eureka!' Or else: 'Give me a fulcrum and I will move the world' There is also Archimedes' screw, but you are not expected to know what that is. — Gustave Flaubert